Nuala came to Waggy Tails five years ago. At fourteen months she was somewhat unruly having had very little input in her previous two homes. She soon settled into her new home and made friends with her house mate, Willow the Collie. Nuala turned out to be very receptive to training and a quick learner. She now does agility and attends gundog classes for the discipline and she helped her Dad win the best handler shield. She is still quite strong willed at times but we wouldn’t be without her. We foster dogs and she is very gentle with them and so tolerant of the youngsters who jump all over her and push her out of her bed. She is really laid back and knows how to relax. All she wants in life is to be with you.

When we lost Willow at nearly 16 years old, in January 2019, Nuala was very sad and lost on her own. At the end of February another fox red Labrador called Fletcher came into Waggy Tails.  He was just a year old and we decided to foster him.  Fostering lasted less than a week, as he and Nuala got on so well.  Her sparkle came back and we now have two Labradors who are so well matched and adorev each other. 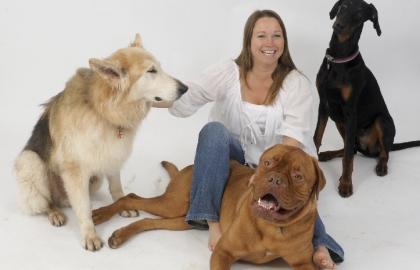