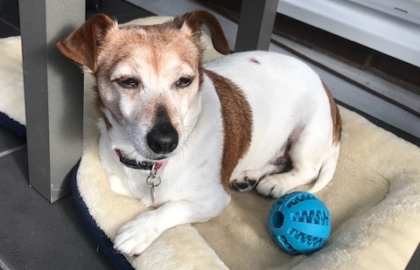 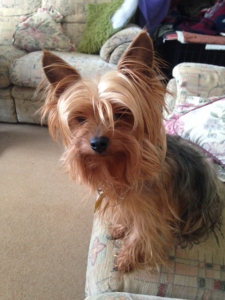 This miniature Yorkshire Terrier came into us aged
2 ½ because she was out of control: biting people and fighting with the other dog in the house. Unfortunately this behaviour can result from not being allowed to ‘be a dog’. She was carried everywhere, not taught to socialise, treated like a human baby, slept in the human’s bed. Poor Lily was desperately unhappy, trembling and nervy.
When she was brought in to the office we were told that she would bite whoever tried to take her. We whisked her off into another room and within minutes she had stopped shaking. She went to stay with our most experienced foster family – who have other dogs – and her behaviour quickly improved.
Lily had a lot to learn and it wasn’t always easy trying to make up for 2 ½ years of missed doggy education but she managed it. She is now a happy, affectionate and loyal dog who knows her own place in the household.…read more 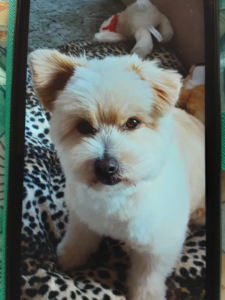 Timmy came in at the end of May 2020 aged about 10 years.  He was a poorly chap and his hunched appearance made the vet think he had a neck problem.  However, it was discovered that he had pancreatitis and the posture was due to the pain he was suffering. He is much happier now that he has the correct medication and is a very affectionate dog. Timmy has a little walk in the morning and enjoys going out in the garden.  He jumps up on the  garden chair then onto the garden table to be brushed before his evening meal. He loves a cuddle (from anyone who’ll give him some fuss!) and is very good in the car.  Every week he does his duty supervising his foster-mum when she is volunteering in the WTR office.…read more 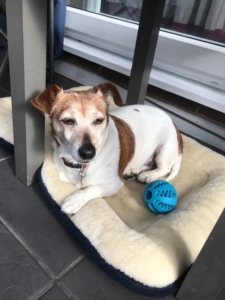 Poppy is the sweetest little ten year old, tan and white Jack Russell Terrier.  She came to Waggy Tails in April 2020 having lived a difficult life with five other dogs and had at least one or two litters.

It was discovered that she had a mammary cyst and had to have surgery plus being spayed.

She recovered and was adopted the following August,  going  through a phantom pregnancy and then developing  mastitis.

Unfortunately she had to have further major surgery in February.  Having made a slow recovery from that, she is now doing really well and has settled into her new home.  Poppy is not very good on the lead but loves being off lead and greeting every dog she meets.  She is exceedingly friendly with all and wonderful in the house, not a “barker” but she thinks she is a Rottweiler when protecting her family!!…read more 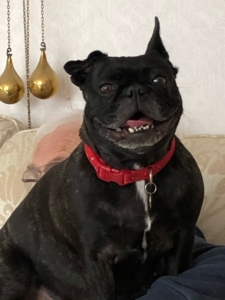 Pearl is a beautiful 5 year old French Bulldog.  She came into Waggy Tails Rescue in March 2020 due to a change in her family’s circumstances.

When she arrived she had a terrible skin condition and very infected ears and was also having a false pregnancy.  The skin and ear infections were long standing issues and were the cause of her crumpled ear.

Treatment was started immediately and Pearl went into a foster home soon after she arrived.  The treatment is on going and Pearl is now looking fabulous but it will be a life long battle to keep her well.

In July 2020 she was adopted and she has  settled happily into her forever home along side a very bossy cat.   Pearl is a real clown who loves to play especially with her football, she loves cuddles, getting muddy and sleeping in the sun shine.…read more 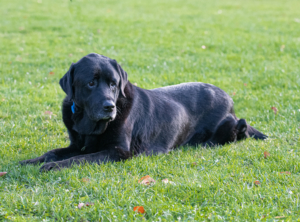 This wonderful and friendly Black Labrador came to us aged 11.

A family dog with a wonderful nature but unfortunately with a few ailments which required attention.  Eddie suffered from some skin conditions and unfortunately has arthritis.  When he arrived he had very little muscle mass around his back legs and thighs.  With the aid of regular medication, these problems are now under control and with regular exercise he has built himself up and increased his stamina.

Eddie has been fostered by a family with another ex-Waggy Tails Rescue Black Labrador, named Connie, who is now 14.  Eddie has settled in extremely well and is a perfect companion for Connie.  When he is not demanding tummy rubs or playing with his toys, he is constantly at Connie’s side either in the house or sun bathing in the garden.  Whilst on his walks, Eddie loves to interact with other dogs and is very vocal.  He is very good with approachable dogs and their owners.  Without doubt, dinner time is Eddie’s favourite.  When the word “dinner” is mentioned we are all treated to the “Eddie shuffle” which is his little dance of excitement.

A friendly, affectionate and happy boy.  Eddie is now enjoying the retirement he deserves.